Yallah – You all are hackers

“YALLAH- You all are hackers” is an international exchange and cooperation project between the University of Siegen and Birzeit University in the West Bank in Palestine. The project is funded by the DAAD program “University Dialogue with the Islamic World” and will be implemented for the first time in 2016. In two exchange phases of four weeks each, ten students from one university visit the other country. In addition to getting to know the region, culture and people, it is also about working together on projects that focus on local issues. The goal is the joint development of creative and sustainable approaches to solutions, in the implementation of which the students also make use of digital fabrication methods, which happens, for example, in the Fab Lab Siegen or in and around (hack/maker/*) spaces in Palestine.

As part of the first exchange phase, ten students and two staff members of the University of Siegen traveled to the West Bank this April, excited and full of expectations. After an initial orientation phase with many new impressions, all students from both universities brainstormed together to develop project groups dedicated to the various problems and possible solutions.

One project group, for example, dealt with the computer club in the refugee camp “Al-Amari”, which on the one hand aims to promote intercultural exchange between Palestinians and refugees on site, and on the other hand offers a collaborative and playful addition to the limited educational opportunities in refugee camps. The club was already established in 2013 as part of research work for the come_in project. The students first took care of repairing the infrastructure on site and developing new workshop ideas with the available resources. Afterwards, several workshops were held with children, in which they were taught the simple basics of electrical engineering so that they could directly build their own first circuits. Even after the first exchange phase, the on-site workshops are still continuing. 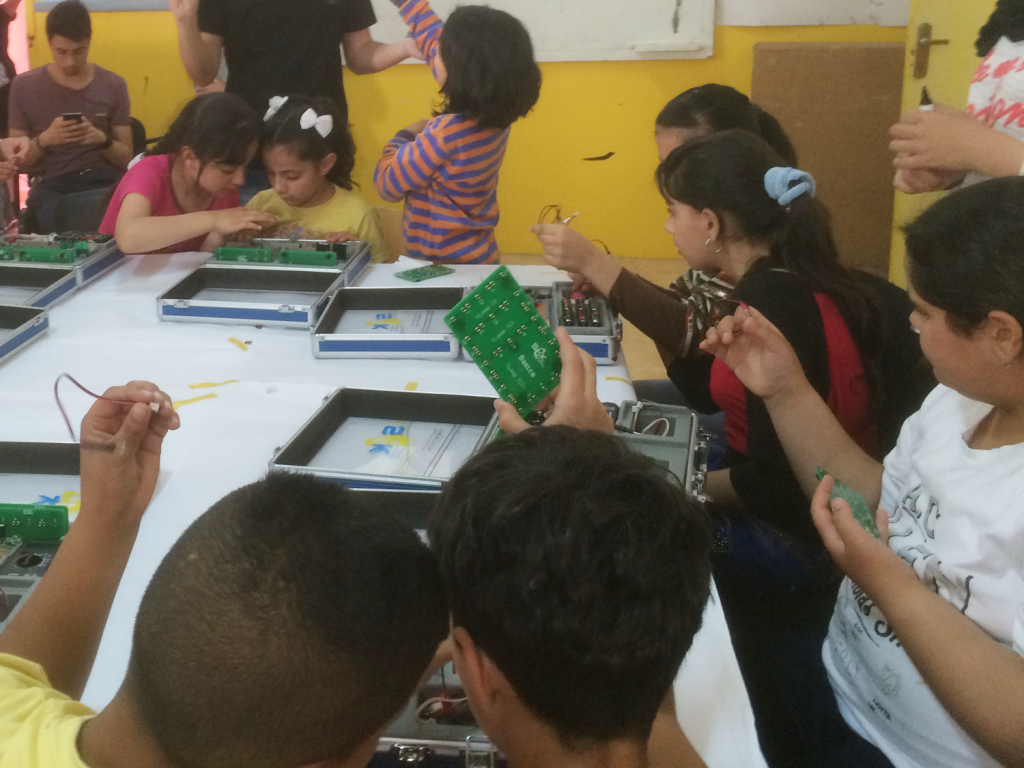 Another project group dedicated to the (plastic) waste problem frequently found in the Middle East (as in so many parts of the world) developed, among other things, the first prototypes of edible cutlery made of dough and conducted a study on plastic bag consumption in supermarkets. Another project team built a small garden in the refugee camp under the title “Urban Gardening”, for which, among other things, plastic bottles were recycled as watering cans and planters. The individual groups repeatedly made use of principles of hacker and maker culture in their projects.

But outside of the projects, there were other points of contact with hacker and maker culture, as well as with digital fabrication opportunities on the ground. For example, students participated in an Arduino workshop at the first Palestinian hackspace, Vecbox. In addition, students and staff from Siegen, who are currently also actively involved in setting up our Fab Lab, held several 3D printing workshops at the university, where not only were the basics of 3D printing taught, but the participants also designed and printed their own first 3D models together. As a prerequisite to holding the workshop, the available 3D printer was also collaboratively maintained and serviced. In the course of this, the university partners of the University of Siegen were also able to advise a professor on site on the purchase of a new 3D printer.

During the four weeks on site, the students experienced a lot. A lasting impression was left in particular by the strong contrasts between innovation and tradition that are lived out locally. For example, a horse plowed a field right next to the Hackspace, where innovative technologies like 3D printers are used.

In summary, a trend toward innovation via a community-oriented hacker and maker culture – as in many places around the world – is also evident in Palestine. However, the development, elaboration and dissemination of these trends, which ultimately also have a great deal to do with self-determination, are always faced with major challenges. Yallah is one piece of the puzzle of many in the establishment of global collaborations at eye level, in which creativity, self-determination and the use of (digital and distributed) fabrication methods play important roles. In August, the second exchange phase begins, which will take place in Germany and during which the students also want to further develop their solution approaches at our Fab Lab. You can read detailed reports about the experiences during the exchange so far on the project’s blog.

From now on: Lab opening for members of the University of Siegen every Wednesday

The Fab Lab Siegen is now open to members of the University of Siegen every Wednesday from 10 am to 4 pm.

The Lab is now also open on Wednesdays and Saturdays